Do you remember what happened in the last game? Who saved which royalty? Who conquered which tavern? Who died laughing? Now, it doesn't matter. This is the game where people bet the gold to tell the most outrageous stories while the NPCs interrupt with their versions. It's a fantasy rumor mill.

So You're in a Tavern is about telling outrageous stories about adventures that are absolutely true in every way. It uses a deck of playing cards and a few tokens to help tell the tales and determine a winner. It can be played with a group or solo.

Players take turns drawing cards to prompt for an outrageous story. As the player tells their story, other players add wagers to change the story. "I'm sorry, Sir Pantsonfire, but wasn't it a giant daisy, not a fire-breathing dragon?" The player can accept the wager and incorporate the change or deny it by adding a coin of their own. 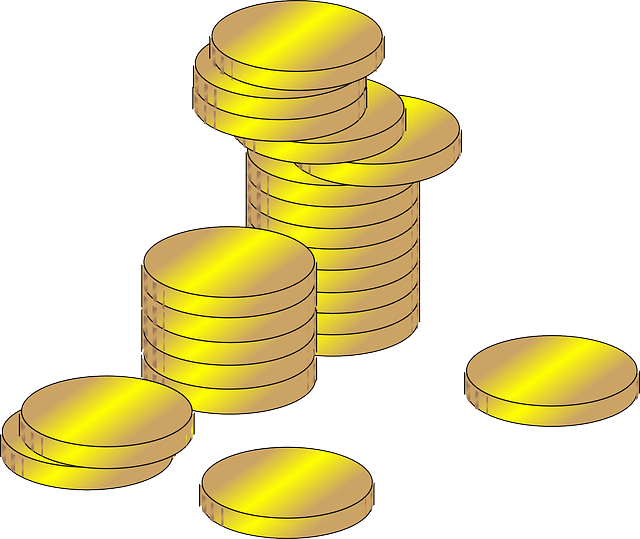 It was a story as old as time. Four adventuring friends swaggered into a tavern. Sir Gillaboste clanked to the bar and shouted "Barkeep! An ale for my friend!" while Himbo the Thirsty unholstered his trusty lute.

The round and bald barkeep poured what passed as ale into four dirty glasses while keeping an eye on Shadow, who kept slipping her hands towards the purses of the honest customers. "What brings you back to our fine village?"

Grassy the White waggled their fingers, summoning a translucent hand to fetch their drink to a table in the corner.

"It's like this," Gillaboste said. "We were minding our own business, guarding this caravan of antique sculptures when...."

"Wait!" cried the buxom serving woman. "I heard it was a wagon of untaxed whiskey."

"So it was. Anyway, as we entered the Darkenscairee Wood, we were beset by bandits and..."

"Hold up," the mayor walked into the room, twirling his mustache. "I have it on good authority that you were accosted by demons."

"Right you are!" cried Gillaboste. "But they were wearing masks. Clearly bandits in training. And they had taken a princess hostage."

"And by princess,” asked the stableboy. “You mean the crown prince?"

"Son of a...who's telling this story? Just give me a drink."

"Son, you can't can't get mad at the rumor mill for beating you here." 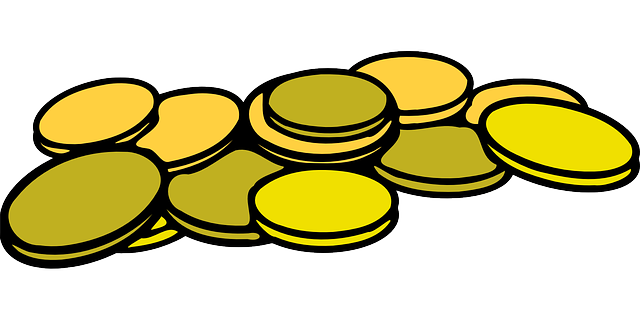 So You're in a Tavern can be played as a standalone game or it can be used as a rumor mill for another game to weave tales of the players' exploits and influence how the world sees the party.

So You're in a Tavern is a hack This One Time, which, in turn, is a hack of I Went to Japan Once by James Lennox-Gordon and is partially inspired by The Extraordinary Adventures of Baron Munchausen. It uses the Dicier font by Speak the Sky.

In order to download this game you must purchase it at or above the minimum price of $1.99 USD. You will get access to the following files:

Support this game at or above a special price point to receive something exclusive.

If money is an issue for any reason, please take a free copy.

So You're in a Tavern is a mini RPG where adventurers are retelling exaggerated stories of their exploits in a tavern. Each player tells their own tall tales, with other players being able to interrupt and add even more far-fetched details.

Good grief this is brilliant and hysterical, and a REALLY amazing twist on the "I Went to..." format! 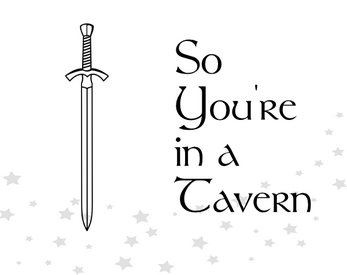 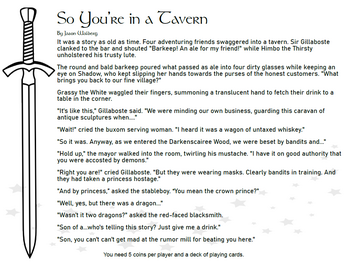